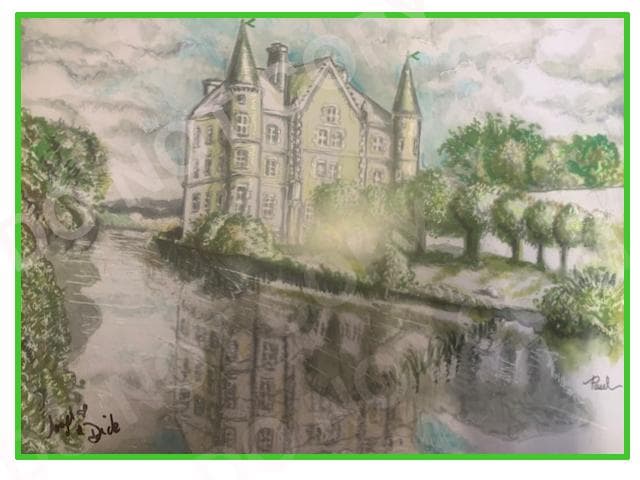 This is the story of Paul or Sir Paul as he’s now known to his friends.  Paul’s friend of 30 years, Steven Cuddy, inspired him to not only survive a serious operation, but gave him the courage and inspiration to create this amazing piece of art and in so doing he has become an ambassador for the Lily Foundation with recognition from TV Royalty Dick and Angel Strawbridge as well as the Royal Family!

This is Paul’s story as shared in Steven’s own words (it’s a long one today but an inspiring read): 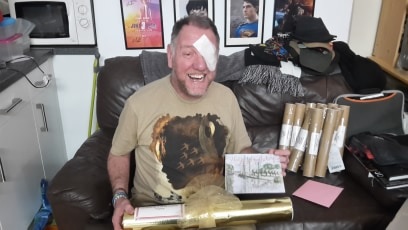 “Paul has been my friend for over thirty years. He has had a few medical problems over the years.  Once he lost his sight and then his wife left him and he also lost his home on top.  I’ve always been there for him.

Just after Christmas he was rushed into hospital with a serious heart condition and almost died. I used to visit him in the hospital and watch him calmly draw pictures for the lovely nurses – with a continuous heart beat of over 155 bpm for 3 full weeks!  I wondered how he was keeping so calm, perhaps it was the calming effect of art?  So I hatched a plan.  I asked Paul if he could do a drawing for me and I asked him to draw a picture of Dick and Angel’s Château de la Motte Husson, knowing how wonderful the people are that are on ETTC FAN GROUP.

Over the next few days he drew the picture but his condition was getting worse. His legs had blown up and he was constantly shaking.  I really started to worry about him and it was then that Paul told me his operation was the following day.  As I left Paul that night I gave him a hug and told him he was going to be alright, and said my goodbyes.  I remember walking out his room thinking this would probably be the last time I saw him.  I said to myself if he makes it I will do my best to help him have a purpose and a goal.  Thankfully he made it through the operation.

I showed Paul the response that his picture had received from the ETTC fan group – thousands of likes.  This really cheered him up but I could tell he was worried about his heart.  So I asked Paul when he planned to finish this drawing for me, and he asked why.  I replied “Because I’m going to make it world famous”. Oh yes he says that’s never going to happen, not with this rubbish drawing – who would want that?

I then told my friend Paul that people had already been asking to buy it – I could sell it 1000 times over.  “Really?!” was Paul’s sarcastic reply to which I responded “Yes Paul don’t you understand, people do care and they know what it has taken for you to draw this picture”. Blind in one eye and blurred vision in the other, shaking like a leaf, a heart rate of 155 with it going up to 300 bpm; crash team waiting for you to die so they can try and restart your heart to save your life. In constant pain and not wanting to go to sleep in case you never woke up. Yes Paul people do care – you put your heart into it and it shows”.

A few days later Paul was discharged from hospital and I took him back to his house and told him to finish the drawing, which he did over the next few days. When it was complete I said to Paul “what do you think if we did a limited edition print and give them to the lovely people on ETTC fan group?  Better still what if you start up a Just Giving page where you could raise funds for Muscular Dystrophy. I will pay for all the printing and get it sorted”. Still in disbelief Paul said “No problem Steve are you sure people really want them?”  Let’s wait and see Paulie!

Anyway I posted them on FB telling everyone if you want one make a small donation and pay the P&P and we will send you one. Lots and lots of interest. We had a thousand printed just before Covid 19 lock down, Paul being high risk in complete lock down.  However we still managed to get out over 200 prints and raised over £1500 for Muscular Dystrophy and NHS.

I told Paul I would contact Dick and Angel to tell them about his picture; Angel was amazing, sending some lovely emails and being very supportive.  I think one of the funniest things I remember was Paul’s face, he simply couldn’t believe that Angel loved his picture.  Here’s the conversation:
Paul [shouting]: I want to send her a print
Steve:  We’ll send her one
Paul: No we won’t – let’s send her the original
Steve: OK then Paul you want to send Angel MY drawing the one you drew for me?  Oh, yes I forgot it’s yours.  Don’t worry Paulie I don’t mind as long as they hang it in the Chateau and keep it safe.

There was just one more thing I wanted to ask Dick and Angel if they wouldn’t mind signing the 1000th print for a wonderful lady on the ETTC fan group called Jan.  Jan is in a care home and suffers from Motor Neuron Disorder, she is a massive fan of Dick and Angel and I knew it would make her year if they would do that for us.  So we sent them to Dick and Angel. It took a while but it eventually got to them and we had another fantastic response from them.

In the meantime, because of the lock down, I was trying to keep Paul’s spirits up and I jokingly suggested to Paul that we send some of these to the Royal Family.  After laughing for about 20 minutes Paul said “OK let’s do it.  What’s the worst that can happen?” to which I replied, well we could end up in the tower of London with our heads on a pike, LOL. Come on Steve, said Paul, let’s do this, so we did.  We told the Royal Family that we had raised funds for charity and to both of our surprise we had a reply from all of them – The Queen, Prince Charles (twice) and one very personal note to Paul from Prince William.  Absolutely amazingstuff. Paul was chuffed and  didn’t stop smiling for three days.  Got a bit annoying after a while, he would ring me up and say Sir Paul speaking is that you peasant Steve! 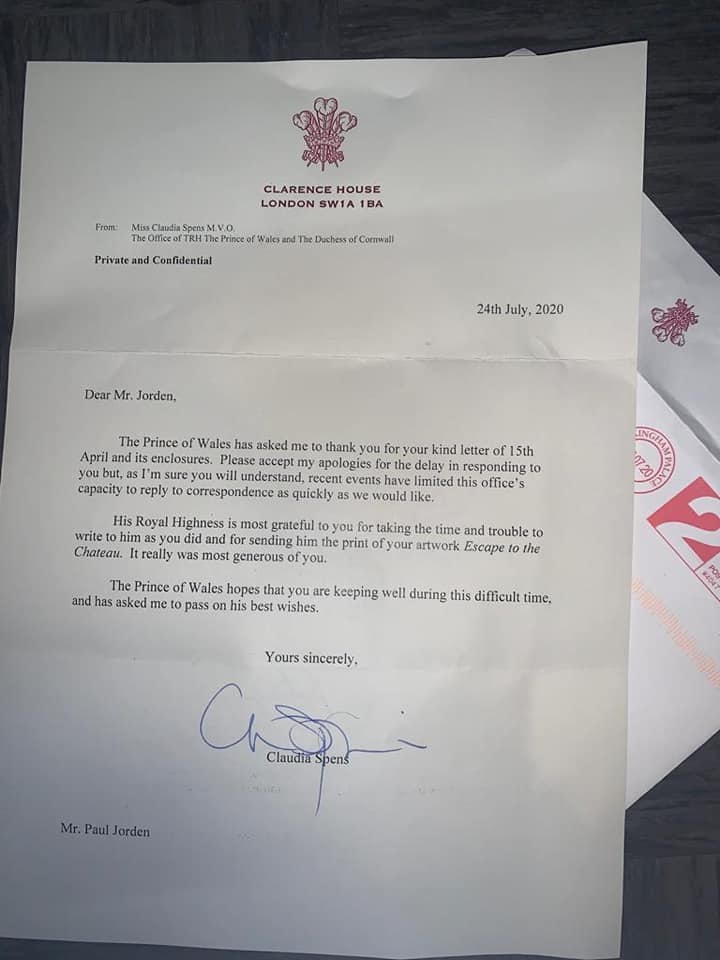 The only good thing about lock down for me was it gave me time to think, and to help Paul more than I would normally have been able to, and also to research his disorder, Mitochondrial disease (a form of Muscular Dystrophy).  I Googled the disease and up popped the Lily Foundation.  So I decided to contact them to see if I could help them fund raise and in return they could possibly help Paul.  It wasn’t long before they contacted us, first speaking to Paul and then me, Liz Curtis you are an amazing person. The Foundation was brilliant, they welcomed Paul into their family (as they call it) and sent him information; I couldn’t believe how kind they were to Paul.

It was then that I decided I would try to help funds for the Foundation.  I had a chat with Paul and told him my idea was to ask Dick and Angel to sign 100 copies of his picture.  He told me he thought it was a good idea but it was asking a bit much from Dick and Angel, so I ignored him and told him to send them anyway, which he did (sending 110 of them instead which you can do when you’re a member of the Royals).  In the meanwhile I was so impressed with the Lily foundation that I told Paul I was going to make a donation to them and he asked how much I was thinking of giving.  I can just about afford to send £1000.  Ok, he said, in that case I will send them £500.  So that’s what we did, between the two of us plus a few others, we managed to send them £2000.

We then waited for a reply from Dick and Angel and to our relief they said as long as all the money raised would go to the Lily foundation they were happy to sign 100 copies. So I recently posted on FB that we had received the signed pictures and that for every heart I got I would donate £1.  We got 4000 HEARTS!  Good job but I had to cap it at £1000.  To be honest, the response has been overwhelming. I told Liz Curtis from the Lily Foundation and she was amazed and she told me she would love to pick the 100 winners. Angel was completely amazed to hear the response and she has sent many emails to Paul calling him “darling”, “my darling” – she clearly doesn’t know he only responds to Sir Paul nowadays!  I don’t think Paul – sorry sir Paul – can believe the response from everyone, especially the wonderful ETTC fan group. I can’t thank them enough for helping Paul.”

Thank you Steve for sharing this with us.  If you want more information or to donate visit Steven Cuddy’s FB page https://www.facebook.com/steven.cuddy.7

For more information on the Lily Foundation click here https://www.thelilyfoundation.org.uk/