Do You Suffer From DIYitis? 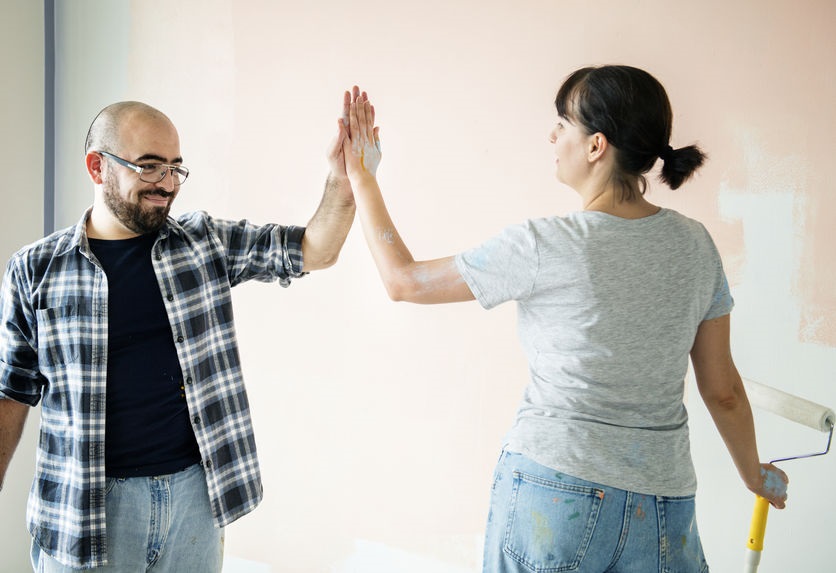 Has the DIY bug bitten you?  What is the “maladie” that infects DIYers anyway??  I call it DIYitis and I can personally attest that once you’ve been infected with it, it’s in your system and completely incurable!

After watching Dick and Angel Strawbridge in the early episodes of their Escape to the Château TV series, there was no mistaking that Lisa and I suffer from the same “infection”.  Of course, so do the thousands of faithful fans who watch the show and its spin-off, Escape to the Château DIY.

Yes, we all tune in sympathetically and faithfully follow their social media blogs and vlogs with the greatest of interest since we all “suffer” with the same “maladie” don’t we?  By watching and following the social media pages of château owners, we are right there vicariously renovating alongside them.

Perhaps one symptom of DIYitis is how it affects one”s eyesight.  We look at an old building or a neglected [totally enchanting] cottage or a cast-off piece of furniture and we see past the weeks, months or years of toil ahead.  What we see with our mind’s eye is the end result! Yup, that’s it – mind over dusty, rusty, broken-down, spider web covered matter.

Surely another symptom of DIYitis is how it affects your sleep pattern, for here it is at dark o’clock and I”m writing this blog article before heading to Brico Cash to buy – yes, DIY supplies such as paint, caulking and electrical sockets for today’s challenges at renovating our old bungalow.  That’s right, our current DIY project is NOT a château!

The DIY bug is a nondiscriminatory “infection”, château, cottage, dilapidated barn . . . it’s all the same.  It’s that small voice in your head, that love at first sight – yes, this is the one! We have already convinced ourselves “all it’ll need is a lick of paint” . . . . right said Fred!!

I was moved by Beck’s recent blog sharing her innermost feelings about the first anniversary of ownership of Château de la Ruche by the Jones family and how it has impacted every aspect of their personal and family lives.  Tim and Rebecca are not just a husband and wife, they are working parents, gardeners, innkeepers, painters, decorators, chefs, bakers, wedding and special events coordinators, and – oh yes, bloggers!  (If you like keeping up with the Joneses, you will love following their Facebook page.)

Our friends Sue and Steve Clark have restored Château La Garenne which had no roof when they bought it.  The brambles against the house were 6 feet high but today it’s their beautifully restored home and home to their stud farm. They have also lovingly restored 2 amazing gîtes on the property and their acreage also hosts a top-rated campsite for motorhome enthusiasts.

Does DIYitis make you old before your time, or is it a secret fountain of youth?  Ask David and Lesley Craven, long-time owners of Châteu La Cour.  Yesterday, Lesley celebrated a landmark birthday, but she doesn’t spend her days in a rocking chair with a shawl over her lap – no sir!  She enjoys her days in the château’s kitchen, pursuing her passion of creating sumptuous gourmet meals for her B&B and gîte guests. The fruit, vegetables, and herbs used in her haute cuisine dishes are fresh from David’s organic garden.

That brings up another aspect of DIYitis – it is clearly incurable.  David and Lesley stand testament to this fact having been happily at it for over 20 years when they purchased their château after taking an early “retirement”.  So how did you catch DIYitis and when did you first realize that you were infected?  For me personally, it began in the early 1970s in Metz, France where I used to go to the Saturday flea market.  I was an airman in the US Air Force living in a barracks on base, and I began by collecting and restoring old wooden wall clocks.  They were the kind of clocks that one winds with a key, with porcelain faces and a brass and porcelain pendulum. From there, I went on to restoring a 1937 Cadillac sedan which had the same long-haul V-8 engine which was later used in WWII tanks!

More recently, Lisa and I completed a 5-year renovation project on a vintner’s house in the Mosel wine region of Germany – two full wine cellars complete with giant oak wine casks plus four floors of living space above the basement, topped by an attic and a massive terrace all of which was in a poor state of repair having sat empty for 10 years. We thought we had been cured of DIYitis and had it out of our systems once and for all, but oh no – all it took was a move to the Normandie region of France and there we soon found that the infection had returned!

It began innocently enough with a vintage pied-à-terre in the spa town of Bagnoles de l’Orne which we renovated from shabby and dated to très moderne.  But no . . . that was just a teaser for what was to come in Clécy, Suisse Normandie, where we found our current labour of love – a quirky bungalow, which we bought convincing ourselves that all it needed was a lick of paint . . .

So, what’s your story?  We’d love to hear about it and publish it for our followers – if you’re willing to share!  Speaking of sharing – if you like this post, please give it a thumbs up and share it with your friends.  They may well enjoy reading all our blog articles and having a look around our other labour of love, our website ChateauxEscapesFrance.com.