Last Saturday, Lisa was waiting to pay at the supermarket (OK, it was Lidl) behind a couple checking out. The cashier requested their bank card for payment (it was a Bank Cards only checkout line) and the lady had intended to pay cash – she had a bank card but couldn’t remember her PIN number! So, Good Samaritan Lisa said, I’ll pay for your groceries on my card and you can give me your cash. Problem solved! The lady then said, why don’t you and your husband come and join us for dinner at our château this afternoon?

Well, it’s not every day you get such an invitation! After quickly checking our busy social calendar  Lisa kindly accepted and – needless to say, we were both intrigued and delighted to meet our kind neighbors, and to check out their château.

Who would have thought, and what are the chances? Only the day before we had been to visit Château de Pontécoulant, a French Monument Historique, and only a 20-minute drive from our home. As it turns out, our new friends Stephen and Sue’s château is also just 20 minutes away from us! 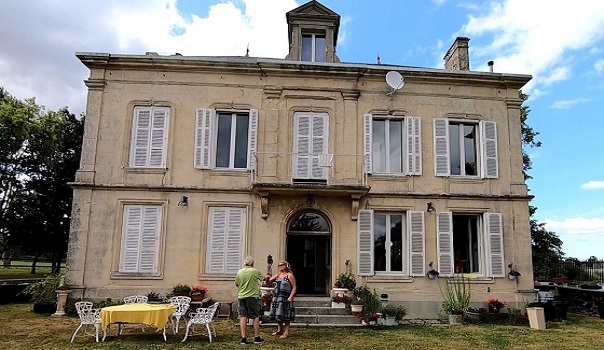 After donning our best smart-casual bibs and tuckers we set off to the town of Aunay Sur Odon in search of Château La Garenne, which we found situated on the outskirts of and set on 50 beautiful rolling acres of Normandie bocage. When Stephen and Sue bought the 18th-century château, it was derelict and in ruins with the roof completely missing and 6’ high brambles covering the property.  It had been vacant for many years.

The farm and acreage that Château La Garenne is situated on were inhabited for centuries before that by Cistercian Monks and on its grounds are buildings which were the residences of Abbots and Bishops, including Bishop Rance, a Grand Master of the Knights Templar. Those former holy residences have been converted into luxury five-star holiday gîtes, lovingly renovated to the highest standard by Sue and Stephen.

The Clarks are busy bees indeed, their 50 acres include barns, outbuildings, and pastures, and they run a stud farm breeding award-winning show Ponies. Neighboring farmers are allowed to graze their cattle on some of the fields and some grow hay which is share-cropped with the gracious landlords.

Not letting any grass grow under their heels, Stephen and Sue go on buying runs twice weekly in search of antique furniture. With all of that going on, they also have 5 pitches on-property for caravans and motor home enthusiasts. Sue serves up afternoon tea, Sunday Roast, and weeknight barbecues.

All in all, we had an amazing experience touring Château La Garenne with its five-star gîtes, its stud farm and fields, and best of all – getting to know our lovely neighbors and new friends, Stephen and Sue.

The History Update of Château La Garenne
La Garenne means Rabbit Warren, we were told by many, the previous owners had a sense of humour, but we assumed they meant today!!! 20th century? As no wildlife whatsoever, all eaten; gone… so why rabbit warren?

Not 20th century at all, but the original owners the Cistercian Monks, who gave the name to the estate, the Bishop here was also a grandmaster, of the Knights Templar. We were shocked to learn what they achieved in medieval times.

This was the largest, most wealthy estate in Northern France, we were told it was originally in excess of 100 hectares when in fact it was 100,000 plus hectares from Caen to Vire. The estates were all once owned by gentry, knights, earls, grand landowners, all seeking to go to heaven in their last months or days of life, the Cistercian monks were more than happy to trade their powers to guarantee heaven-sent, in exchange for their estates, which they signed over promptly, which in turn was rented, more income, the lands were also sold to bring in more income, monks cared for sheep which were sold, more income, plus they loaned money to anyone who had assets, it was non-stop income.

I asked, how did the monks move the payments without being robbed, their money – in gold, back to Aunay? Simple, the monks relayed small amounts under their cassock, they were known to have nothing, the perfect cover to pass to each other, from any part of Europe to Aunay.

As soon as more info is sent to me, l will keep you posted… You can help, we need more information.

We know Godfrey Dennis was here FOR 49 years – 1439 to 1630. ANY INFORMATION OR HIS FAMILY CREST WOULD BE WELCOME. Students and teachers have access to more history than what’s on the net for us…. help! Who was in charge before him, and after? Bishop Rance, was as a grandmaster, here, he was also head of priory of St. ANNE, Bayeux, Normandy, France, and HQ for the priory of Saint Anne is in Coventry, we have his coat of arms. We would like to find out who else was here, and their history here… thank you.